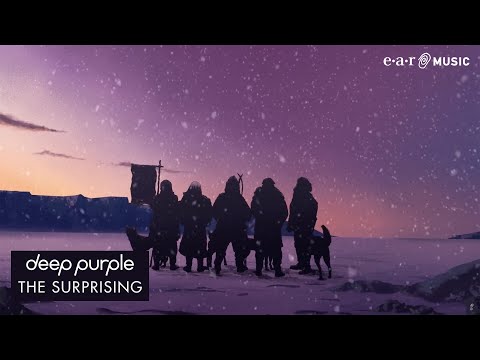 Today, Deep Purple are setting sails into new waters with their first ever animated video.
The official video for “The Surprising”, one of the fan favourites from the international success “inFinite”, takes the viewer on a journey through the magical fifty year history of the band. With high attention to detail, the animated masterpiece follows the five heroes of our story – Ian Gillan, Ian Paice, Roger Glover, Don Airey and Steve Morse – through a stormy ship cruise full of allusions and sees them riding off into the sunset.

The video has been directed and illustrated by Matt Rooke alongside director Peter Rogers who also produced the video together with Craig Hooper and Collin Games, known from the Deep Purple movie documentary “From Here To inFinite”.

Coinciding with the video premiere, Deep Purple and earMUSIC are happy to announce and celebrate the worldwide chart success of the band’s recent #1 album “inFinite” by releasing a very special, strictly limited gold edition on November 3rd. Being released in a high quality 2CD digipak with brand new artwork, the gold edition will feature all of the great masterpieces from “inFinite” while also including a brand new, previously unreleased 80min live show from the biggest metal festival in France, Hellfest 2017, as bonus. Thousands of fans assembled to witness this very rocking, very real performance which will also be available as “The inFinite Live Recordings, Pt. 1” on 3-vinyl and has also been produced by Bob Ezrin.

Every fan’s needs will be fulfilled with the release of the 97-minute documentary “From Here To inFinite”, which shows the history of origin of “inFinite” and provides a deep insight into the workings of the band – for the first time on Blu-ray! The Blu-ray furthermore includes over 2 hours of bonus material, including music videos such as “The Surprising”, 3 previously unreleased live videos (“Time For Bedlam”, “Birds Of Prey” and “Smoke On The Water”), all filmed and recorded at Hellfest 2017, as well as in-depth behind the scenes footage, movie documentary outtakes, interviews and an audio commentary by Deep Purple themselves - all previously unreleased.

This November, Deep Purple are returning to Europe for their “inFinite – The Long Goodbye Tour”.